My nephews are fascinated with fidgit spinners. They each own several and always have one on hand, proudly showing off the various tricks they have mastered. So when I stumbled across a persistence of vision (pov) fidget spinner project on instructables, I knew that I had my nephews’ 2017 Christmas gifts in the bag.

Ken over at The Maker’s Box did a fantastic job with documentation, even offering a tindie kit to take the pain out of sourcing components. I took a few pictures while assembling the project, as well as discovering a few tips and alternatives for the build, so I figure it was worth a build log.

Solder the Bearing Before the Components

Perhaps the trickiest part of this build is soldering the bearing onto the board. The board needs to be centered vertically on the bearing, so you’ll need some kind of spacer to hold the board up while you solder. The build instructions suggest using a couple of coins for this task. This works well enough, however it is also suggested that the bearing is the last thing to solder to the board. I followed this method when building the first spinner, and I found it difficult to balance the coins beneath the board. The components kept getting in the way, so for the last two boards I decided to place the bearing first. This made things much easier. 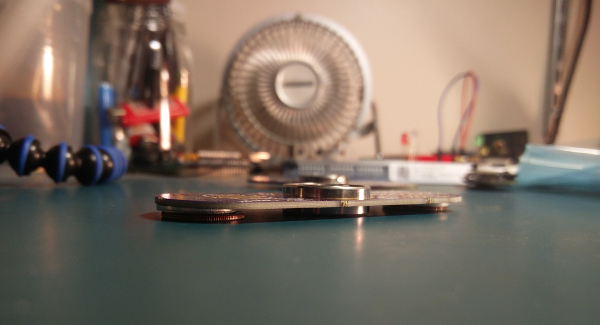 I soldered two locations on the top and two rotated 90 degrees on the bottom of the board. There is so much thermal conductivity in the metal of the bearing that you will need to crank up the temperature of your soldering iron to make this job easier. 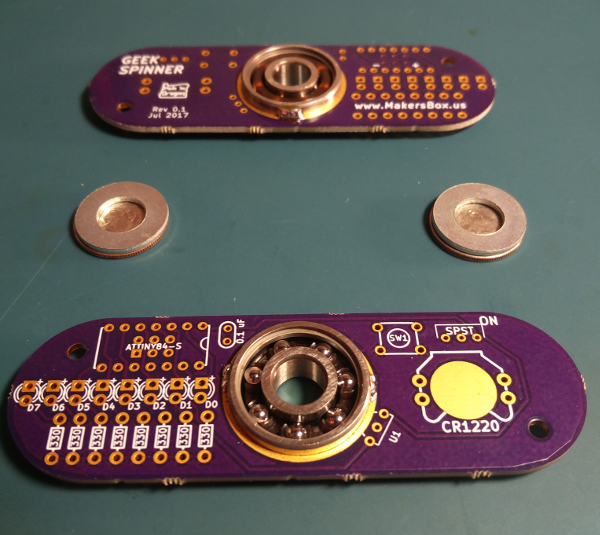 When ordering components for the board, the specified hall effect sensor (the Melexis MLX92231) was out of stock. After some looking around and comparing datasheets I decided to give the Texas Instruments DRV5023 a try. It wound up working fine, and is suitable as a drop-in replacement. Remeber to test the orientation of your magnet!

The initial build specifies 3D printed bearing caps. At present I don’t have a 3D printer at my disposal, so I had to look for alternatives. I took a chance on some simple bearing caps I came across on Amazon. They wound up working fairly well, however they are quite thin, making it difficult to glue in a magnet. After some thought, I decided to drill out a hole (slightly smaller than the diameter of the magnet) in the bearing cap and press fit the magnet into the cap. Overall I’m pleased with the solution.

The minimum order from Osh Park is three boards, however I only needed two spinners as gifts. This gave me the opportunity to build a third spinner as an initial testing/prototyping device. On the extra board I socketed the chip so that I could easily swap the ATTiny in and out. This allows me to use a programmer shield I built a while back, and then reseat the chip into the socketed spinner to see how things looked. It wound up being very helpful in making sure everything in the program looked just right, and in the end I was really glad I built the third spinner.

In this shot you can see the press fit magnet in the bearing inserts from Amazon.

Aside from the bearings and magnet placement, this is a very straight forward build. It would be a great project for anyone new to soldering and wanting more practice. Overall the whole build took me about an hour at a very casual pace.