The LimeSDR Mini is a newer product from the MyriadRF line of SDRs. Its ability to both transmit and receive, decent bandwidth, small form factor, and a reasonable price tag make it a very attractive device for experimentation.

Likely, one of the first things a radio hobbiest will want to do with this device is hook up an antenna, fire up Gqrx, and tune around. Recently I attempted just this, but had some issues getting things setup on an Arch Linux box. It wound up being a bit of a rabbit hole, so it’s worth a note on how I got this setup up and working.

As Github user alexf91 writes in a related gitub issue, the source of the problem is that the “stable” release of gnuradio-osmosdr is nearly 5 years old and horribly out of date. This is the version referenced in the community/gnuradio-osmosdr package, and probably the version most folks will install by default. Thankfully, as alexf91 points out, you can compile a more recent version of gnuradio-osmosdr and then compile gqrx using this newer library, all via AUR.

Compile and Install Gqrx and Dependencies

The order of installation is important here so that the appropriate libraries are available during compilation of the subsequent packages.

If you’re using an AUR utility (pacaur, yay, etc) you can of course do this all in one command, however I find it useful to break bigger things up to make any problems more visible.

If you already have the “stable” version of gqrx and gnuradio-osmosdr installed, you will first need to uninstall them.

This will kick off gnuradio-osmosdr compiling and it may take a bit while it does so.

gqrx-git can be found in AUR.

This gets gqrx to compile, this time with all of our updated dependencies. Like the gnuradio-osmosdr compilation, it may take a while.

At this point you should be able to plug in the LimeSDR Mini and fire up Gqrx. Be sure its plugged into a USB 3.0 port for an optimal experience, and if you’re using a USB cable be sure it’s compatible with USB 3.0. (I was puzzling over why things were weird with my setup for far too long. It wound up being the cable.)

On the first run you will be confronted by the “Configure I/O devices” dialogue. In the device dropdown you will notice an entry for “LimeSDR Mini”. I have had no success in using this option, nor have others on the web as far as I can tell. What does work, however, is telling Gqrx to use Soapy with the lime driver. For that you will need to configure as follows: 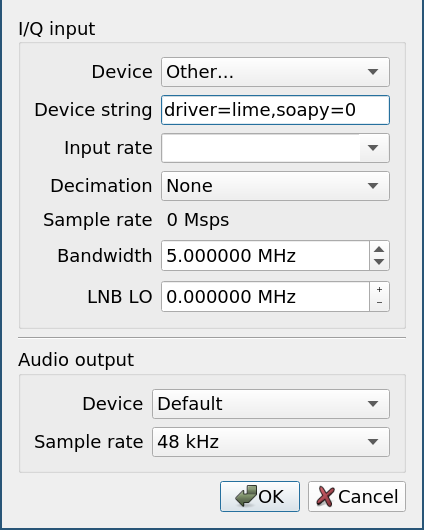 Note: I have occasionally noticed things being a little buggy with subsequent runs of Gqrx, in which case I delete the config file and run it again.

Now you should be in the main Gqrx screen. Before you kick off the DSP you will need to set which antenna to use on the device. Go into “input controls” and set “Antenna” to LNAW, and you’re good to go!